Fans of shamrocks, green garb, and Guinness, rejoice! It’s time to make plans for St. Patrick’s Day. With a camper van, you can seek out the perfect place to celebrate St. Paddy’s day this year, whether you’re in search of the most boisterous festivals, the most authentic Irish food, or the most charming natural wonders.

In the United States, St. Patrick’s Day is a time to honor Irish culture and Irish-American heritage. Distanced from its earlier religious associations, the holiday has also become one of the liveliest party days of the year, with parades, bar crawls, and even music festivals in its honor. Many of these events were canceled in the last two years due to the pandemic. This year, the festivities are back on (with a few safety precautions). Locals and tourists alike are excited to get the ball rolling again. Regardless of whether you have Irish heritage, treat yourself to a day–or week–of much-needed revelry around March 17th.

Whether you want to get in on the heart of the action in a major metropolitan area or celebrate unconventionally in nature (or both!), we have ideas for you on this list of ten van life destinations to visit for St. Patrick’s Day. East Coast cities host some of the biggest St. Patrick’s Day events in the world, and Boston is one of them. In fact, Boston was the first place to bring the holiday to the U.S., starting with Irish immigrants in 1737. Today, the South Boston neighborhood comes alive each year with a grand parade. The merriment continues with concerts, plenty of Irish pubs, and a 5K race. To relax amidst all the action, take an Irish cooking class at the Westin Copley Plaza or tour culturally-significant spots on the three-mile Irish Heritage Trail.

The largest St. Patrick’s Day celebration in the world takes place in the Big Apple, with an estimated two million spectators and revelers annually. The primary draw is the huge New York City Saint Patrick’s Day Parade. Later that day, join one of the city’s many bar crawls or nightlife events. If you’d rather escape the crowds, you can social distance while enjoying Irish music, dancers, and specialties at the extensive outdoor dining offered by Chelsea Market in Manhattan. Our nation’s capital has elected to cancel its 2022 parade, but you can still delve into the city’s rich Irish-American history when you visit the Embassy of Ireland and St. Patrick’s Catholic Church. For more-energetic merriment, buy tickets to Shamrock Fest, America’s largest St. Paddy’s Day festival. Dance your heart out to bands like the Dropkick Murphys and DJs like Steve Aoki. Runners can also get their hearts pumping at two themed runs happening before and after the holiday.

Looking to spend the holiday in green T-shirts and shorts? St. Patrick’s Day in sunny San Diego might be for you. The city likes to have a rollicking good time with an annual parade and festival, Leprechaun Run, 3-day party hop event, Craft Beer Invitational, and the ShamRock Music and Beer Festival. The ShamRock Festival turns the streets of the Gaslamp Quarter the color of its namesake with 80,000 square feet of AstroTurf. If you take part in the alcohol-fueled revelry, you can recharge with some mellow beachside van camping. Or switch gears completely with a classy St. Patrick’s Day-themed afternoon tea at the quaint Julian Tea and Cottage Arts. Chicago is one of the country’s top destinations for St. Patrick’s Day thanks to a quirky tradition–dyeing the Chicago River bright green in a nod to the Emerald Isle. On the Saturday before St. Paddy’s Day, experience the green waters from an unbeatable vantage point with a boat tour or kayak rental. A few hours after the river dyeing, the festivities heat up with a boisterous parade. The 2022 parade will be one for the books after two years on hiatus. Organizers are striving for a safe event by requiring proof of Covid-19 vaccination for all guests. After the parade, head to the Irish American Heritage Center for fun and informative programming. If you’re not completely tuckered out from such a full day, you can round out the weekend with two smaller parades taking place on Sunday.

Another city famed for its ability to host a great party is New Orleans. Shortly after Mardi Gras, St. Paddy’s Day is another cause for city-wide celebration. Expect more than a week of festivities, including multiple parades and parties. The Irish Channel, a historically Irish neighborhood, plays host to a bustling block party and one of the most vibrant St. Patrick’s Day parades. This event has a distinctive tradition–the people in the parade throw Irish veggies like potatoes, cabbage, and carrots (along with beads and flowers) at the throngs of onlookers. 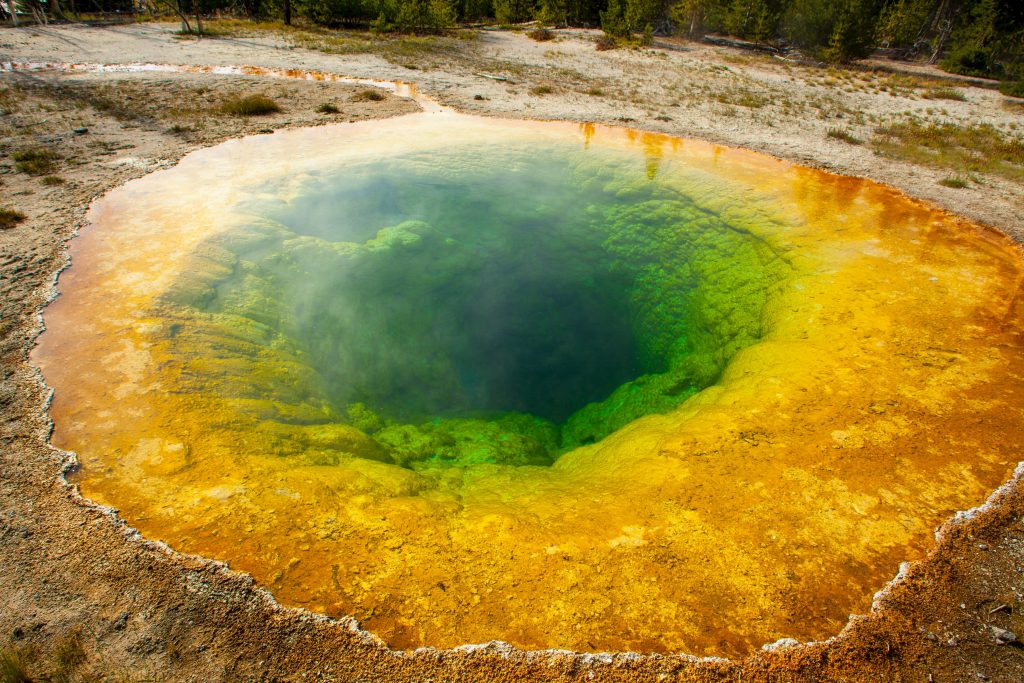 If parades and festivals aren’t your thing right now–or in general–there are still plenty of ways to commemorate the 17th of March. One of our favorites? Taking in some jaw-dropping emerald pools at Yellowstone. You probably know that the colorful hydrothermal landscape is what makes this national park an addition to bucket lists around the world. What you might not know is that the park boasts multiple pools in the trademark hue of St. Patrick’s Day. Marvel at mineral- and microbe-rich waters in verdant shades at Morning Glory Pool, Abyss Pool, and the aptly-named Emerald and Green Pools. Then retire to your van for some DIY festive foods.

Another St. Paddy’s Day option for nature lovers is to chase down shamrocks. Shamrocks are considered an emblem of both Ireland and Saint Patrick. These iconic plants come in many varieties, including types of clover and sorrel. In Northern California’s Golden Gate National Recreation Area, you can explore a majestic landscape of giant redwood trees and delicate redwood sorrel, which will be blooming in March. Soak up the luck of the shamrocks, but remember not to pick them. Muir Woods National Monument is around 40 minutes away from San Francisco, so you can also head into the city for authentic Irish cultural events.

In the coastal city of Savannah, enjoy perfect spring weather and a range of delights including the annual greening of the Forsyth Park fountain and the Shamrock Ships Flotilla. If you don’t know what a flotilla is, picture a parade with themed floats that takes place on a river rather than a street. The flotilla was devised in 2021 as a new Covid-safe option to replace the city’s popular annual parade. This year, Savannah residents and visitors will get to indulge in old and new traditions with the return of the parade as well as the second year of flotilla fun. Even if you’re not in Georgia for St. Patrick’s Day, you can tune in to SavannahCams.com to watch the decked-out boats remotely and vote for your favorites. Van traveling in Canada or up for a jaunt across the border? Consider spending your holiday in Montréal. The cultural prominence of the Irish in Montréal is clear–the city displays a shamrock (one of four botanical symbols) on its flag. If that doesn’t give you a clue of the level of St. Paddy’s Day fervor, Montréal was also deemed by National Geographic to be one of the top ten St. Patrick’s Day destinations in the world. This sterling reputation was primarily earned through the community’s exuberant parade, which can draw up to 700,000 spectators. It’s looking like the parade will take place in a different iteration this year because of pandemic uncertainties, but a smaller, equally enthusiastic celebration might be just what the doctor ordered. Curious about van travel in Canada? Check out our tips.

Did you enjoy this St. Patrick’s Day travel guide? You might also like “Best Locations to Celebrate Mardi Gras, Van Life Style,” “Top Van Destinations to Spend the Holidays,” and “Dreamiest and Steamiest Hot Springs to Venture to this Valentine’s Day.” It’s never too early to plan a year full of festivities at the ideal destinations.

Van life allows you to chase bucket-list experiences and make memories wherever the wind–or your itinerary–takes you. To browse the best camper vans on the market, visit Rec Van.