10 Adventure Books to Read on your Summer Road Trip Summer is the perfect season to hit the road in your van. When the weather is warm and the sun is shining, there’s no better time to get out there and discover all the world has to offer. After a day of excitement and exploration, sometimes all you want to do is relax with a great book. Whether you’re snuggling in for the night or lounging under a tree at the campsite, or chilling on the beach, here are 10 adventure books to complement your next summer road trip. 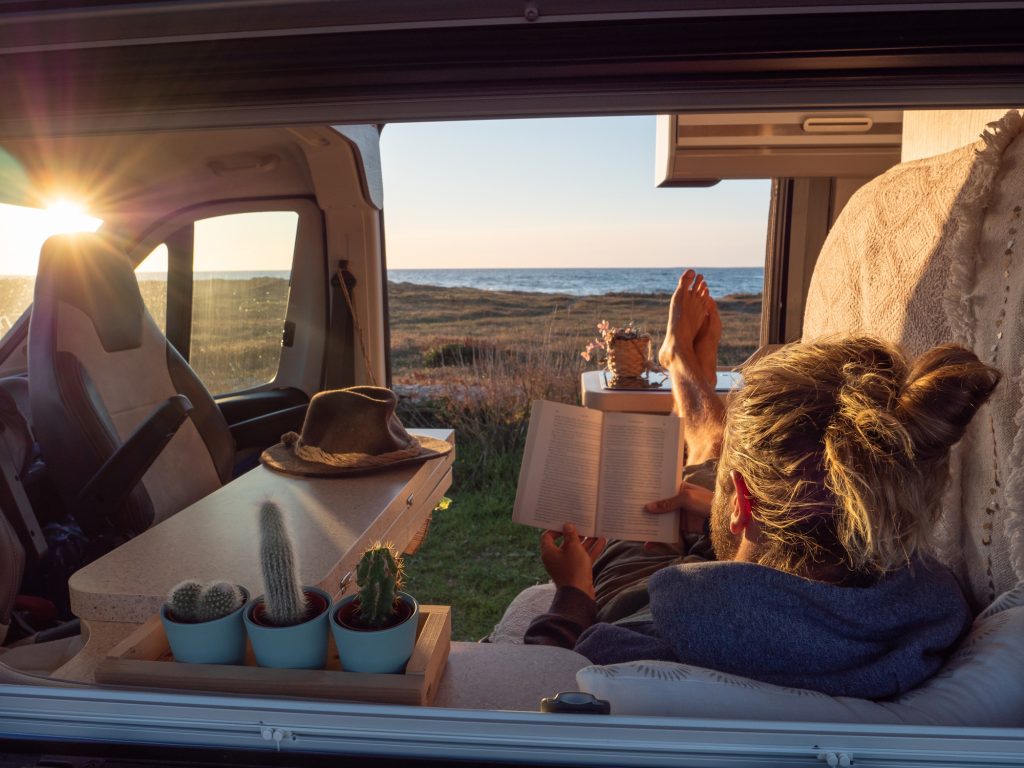 Braving It: A Father, A Daughter and an Unforgettable Journey into the Alaskan Wild by James Campbell

James Campbell jumped at the chance to spend a summer helping his cousin build a cabin in Alaska’s remote interior. But how would his 15-year-old daughter react to life without the comforts of home (like electricity and running water)? Add in mosquito swarms and grizzly bears, and it’s a recipe for adventure.

Braving It recounts that fateful summer, and the love of wilderness adventure it sparked in James and his daughter. In the end, they returned multiple times to complete ever-more-exciting quests in the stunning beauty of America’s last frontier.

Not Without Peril by Nicholas Howe

People have been mountaineering in New Hampshire’s Presidential Range since the 1800s… but they’ve been having misadventures there, too. The region is known for its severe weather, tricky ascents and deadly accidents, and Not Without Peril chronicles it all.

The mountains’ rich history is told by journalist Nicholas Howe, who collected a series of fascinating tales about the region. These gripping stories of adventure and tragedy are impossible to put down. It’s a perfect read when you’re sitting comfortably in your cozy RV!

Between Two Kingdoms by Suleika Jaouad

Twenty-two year-old Suleika Jaouad had her whole life ahead of her: She’d just graduated from college, had just fallen in love, and had just moved to Paris to pursue her dream career as a journalist covering war zones. But that all came crashing down when she was diagnosed with leukemia.

Suleika spent the next four years fighting for her life. When she finally emerged, cancer-free, after years of focusing on survival, she knew she had to discover how to live in the world again. So she packed her belongings, gathered up her dog Oscar, and set out on a journey of discovery. Between Two Kingdoms recounts her 100-day, 15,000 mile road trip across the U.S., and all the amazing people she meets along the way.

The parts in the middle are fascinating. Author Héctor Tobar uses Sanderson’s own travel journals to trace his unbelievable journey from the Midwest to the Caribbean, Southeast Asia, Africa and, finally, Central America.

By the time she was 26, Heather “Anish” Anderson had already hiked the Appalachian Trail, the Continental Divide Trail and the Pacific Crest Trail. But 7,900 miles wasn’t enough. In 2018, she left her job, her husband and her life and became the only woman to hike all three in one year.

Thirst: 2600 Miles to Home documents Heather’s epic hike, known as the Double Triple Crown of hiking. Her story will inspire you to get out there and explore.

Due North by Lola Akinmade Åkerström

Spanning continents and cultures, Due North chronicles writer and photographer Lola Akinmade Åkerström’s travels. All are part of her attempts to reach a goal she’s had since she was a map-obsessed kid: visiting the North Pole.

Winner of the Lowell Thomas Gold Award for best travel book, this engaging tale ranges through decades and thousands of miles, with amazing sights, sounds and tastes along the way. Åkerström’s journey takes her across continents, from Nigeria to Sweden and beyond. Her experiences are sure to keep you turning the pages! Travelers Along the Way by Aminah Mae Safi

Travelers Along the Way offers a perfect blend of adventure and excitement. This retelling of the famous Robin Hood saga tells of the adventures (and misadventures) of two sisters who fought to protect their lands and family during the Crusades.

As the sisters make their perilous way home toward Jerusalem, they meet a motley crew of characters that help bring this time period to life in new ways. Science, spying, comradery and more make this book a fun choice for teen readers or anyone who loves a rousing adventure story.

Tom Ryan was middle-aged, overweight and sedentary. But when a close friend passed away from cancer, he decided to honor her life in a way that was very new to him: climbing all 48 of New Hampshire’s over-4,000-foot mountains twice in one winter…. and he was going to take his mini-schnauzer, Atticus along for the ride.

Following Atticus follows Ryan’s adventures up and down icy slopes through one unforgettable winter. You’ll fall in love with Atticus and marvel at the changes wrought in Ryan. Into the Abyss by Carol Shaben

This dramatic true story tells the story of four men who miraculously survived a plane crash in the icy Alberta mountains. Among them was a green pilot, a politician, and a policeman and a criminal on his way to face trial. It’s hard to imagine four more different people suddenly thrown together in a struggle to make it through the night, tragically alongside the six passengers who did not survive the crash.

As the men fight freezing temperatures and brutal terrain, the stark differences between them melted away. In the end, Into the Abyss is a story of adventure, redemption and transformation. The book was written by the daughter of one of the crash survivors and an award-wining journalist.

Looking for a family-friendly tale that involves road trips, adventure and the perfect amount of humor? Walk Two Moons is a perennial favorite, and a great choice if you want an audiobook for those long summer drives with little ones in the car.

The story by Newberry award winner Sharon Creech follows 13-year-old Salamanca as she travels from Ohio to Idaho. On the way, she tells the story of another young girl’s adventures. It becomes clear that the two stories will merge into one lovely, yet bittersweet, tale.

What will you read next? No matter where you’re headed on your summer camper van road trips, make sure you pack a book or two (or at least download a few on your digital reader). After a day filled with the excitement of exploring new destinations, there’s nothing better than relaxing with a great read!